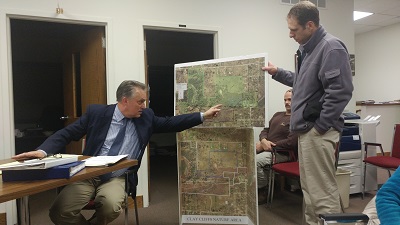 Big Rapids is looking to annex part of Big Rapids Township. Starting in 2006, the area known as the Clay Cliffs was purchased by the City of Big Rapids through a DNR land acquisition grant and private donations.

“Conditions of the grant – the land is to be left natural and it's to be used for public outdoor recreation and the protection of the land for its environmental importance and scenic beauty,” said Big Rapids Mayor Mark Warba during a presentation to the Big Rapids Township Board of Commissioners on Tuesday.

However, Clay Cliffs remains within the boundaries of Big Rapids Township. Warba pitched the idea of annexing that property into the City of Big Rapids at Tuesday's Township Commission meeting noting that...

He went on to explain some of the city's plans for Clay Cliffs as outlined in their newly adopted Parks and Recreation Master Plan, including:

“...natural park area with foot trails throughout the park connected to the community pool and park area, looking to incorporate signage and trail heads into the trail system, developing a trail network throughout the park, perhaps a parking lot, foot bridges for crossing over the creek, maybe implementing a sledding hill, creating prairie planting areas, and bird habitat areas.”

Big Rapids Township Supervisor Bill Stanek had previously suggested the land be transferred under a “425” agreement. The purpose of Act 425 is to provide for a means for two local units of government to share tax revenues resulting from new or expanding development in the areas of their jurisdiction.

Mayor Warba believes Act 425 is not applicable because of the nature of Clay Cliffs.

“No residents inhabit it, there's no development on it, it doesn't lend itself to any development, and that's not the purpose or reason behind it,” he says.

The Township board decided to schedule a public hearing on the matter before taking any action.