A couple of local school districts have closed Friday out of an abundance of caution.

“Late this evening we were notified of a potentially concerning statement that may have been made today by a high school student. Out of an abundance of caution, the timeliness of the situation, and in order to investigate further, Big Rapids Public Schools will be closed, tomorrow, Friday Dec 3, 2021.”

Chippewa Hills Schools Superintendent Dr. Bob Grover posted a letter on the district's Facebook Page late Thursday afternoon stating the school received a email with "vulgar language" and while there were no threats of harm, the message can be interpreted "threatening".

Gover went on to say Chippewa Hills School District is not taking the message lightly.

Initally, school was going to be conducted normally with a police presence but school officials decided to close for Friday, Dec. 3rd. 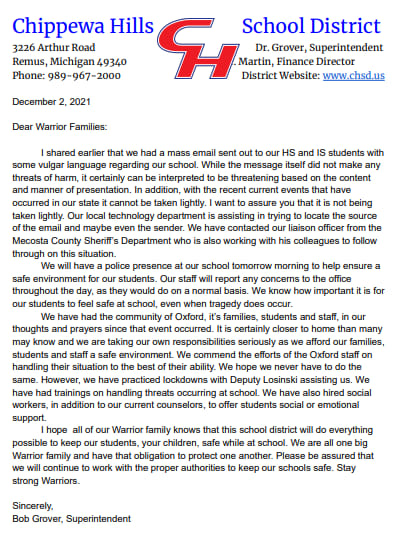 The threats come just days after a shooting at Oxford High School in Oakland Township which killed four students and injured seven others, including a teacher.

On Wednesday, Big Rapids Superintendent Tim Haist sent a letter to parents discussing all the safety messures that are in place to keep BRPS safe.  CLICK HERE TO READ