Posted About Three Months Ago

Now that the winter weather is behind us and spring is starting to take shape, construction on the Big Rapids Campus of Ferris State University continues to stay on schedule.

According to a news release,  as the Center for Virtual Learning framework rises at the west end of the Robinson Quad on the Big Rapids campus, Associate Vice President of Facilities Management Chad Stirrett said that the $32.5 million project remains on schedule for its construction goals. The project also remains within budget. 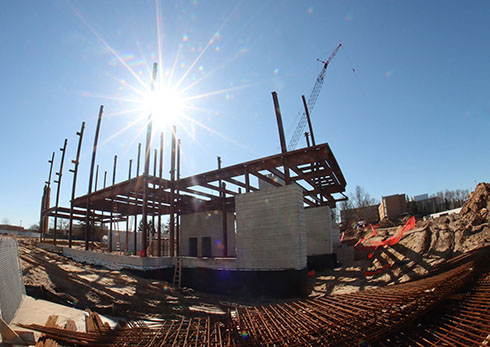 “Much of the concrete will be joined by structural steel so that as spring moves on to summer, the CVL will begin to look like a building,” Stirrett said. “There were no real obstacles in the winter months for Triangle Construction, so work to this point in the project has been refreshingly uneventful. Rain, so far this spring has only been a nuisance.”

The Center for Virtual Learning will house several technology-focused programs from the College of Business, including Digital Animation and Game Design, Television and Digital Media Production, and Information Security and Intelligence, including Artificial Intelligence, as a degree program. Stirrett said faculty from each college and program housed in the CVL engage in regular discussions with project leaders as they prepare for occupancy and coursework in the center in 2023.

“There are monthly meetings in collaboration with our partners in those programs and the School of Education, eLearning operations and Ferris’ Esports programs,” Stirrett said. “BrightTree Studios, our information technology design build contractor, finds those professionals very engaged to keep the CVL state of the art in terms of technological capabilities.”

Block laying went on through the winter on Ferris’ Center for Athletics Performance, which advances on a $15.3 million budget and schedule. Project manager Kara Pellerito, also with Facilities Management, said Granger Construction is the contractor for the new construction and renovation of existing facilities in the CAP plan. 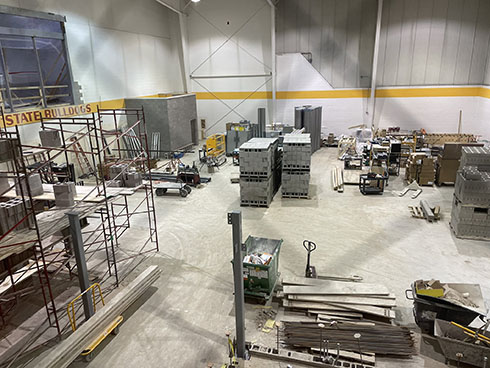 “While the high walls of the Bulldog Arena draw much of the attention, there has been significant work taken up to convert the former volleyball arena into an expanded strength and conditioning space,” Pellerito said. “Larger facilities for our athletic trainers are also in the mix. The renovation on the lower level of the athletic complex is the first phase of our project, which should be completed by August.”

Mileposts for additional elements of the CAP project follow quickly, with the Bulldog Arena, a tournament-level volleyball and basketball facility, due for close of construction in October and a final phase of meeting rooms and new team spaces available in the center by December.

“For example, our cross country teams and the track and field program have never had locker facilities they could call their own,” Pellerito said. “The soccer and softball programs would share a locker room, but with CAP’s completion, separate facilities will be available to those programs.”

Pellerito said their last phase of program-specific construction is not due to begin until the lower-level training facilities are completed.

“I think our teams and Ferris’ Athletics administration is very excited, though their work goes on in changing spaces,” Pellerito said. “The walkway near administrative and coaching offices looks down on the new strength and conditioning facility, with all kinds of construction noise to deal with. Everyone is accepting and enjoying the changes taking place there.”

Economic conditions have impacted both projects, but Stirrett said these pressures are not unique to these ventures well underway on campus.

“Any university or business involved in new construction is required to respond to market conditions through project development,” Stirrett said. “The credit goes to Ferris’ leadership, our benefactors and project partners, and our state’s government for their willingness to collaborate and support the work we have before us.”